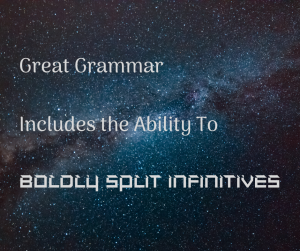 A recent Grammarly blog included a great sign that actually had very little to do with the blog itself. The sign reads, “What do you do when you realize that Latin grammar makes more sense than English grammar?” I’ve never actually studied Latin, so I don’t know for sure that it makes more sense grammatically,… END_OF_DOCUMENT_TOKEN_TO_BE_REPLACED

I was reading an article on dailywritingtips.com called Let the Word Do the Work about redundancy. The author, Maeve Maddox, does a great job making her point with examples of the more common redundancies we run into – such as “free gift”– as well as some more subtle examples, like “maroon-colored.” (Only when someone could… END_OF_DOCUMENT_TOKEN_TO_BE_REPLACED