I tell people that I edit for readability – and that readability is not always grammatically correct. I tell people that because I am not fluent in the formal terms of grammar. I don’t want to try to defend my edits based on participles, infinitives, dangling modifiers, or gerunds. (No matter how many times I look it up, I cannot remember what a gerund is!) I defend my edits based on whether I got to the end of the sentence and understood the point. It was readable. It complied with my definition of Clear Communication.

Punctuation allows a sentence to meander without getting confusing.

For clear communication, writing needs clear separation of thoughts. Mostly, that’s done by ending a sentence. Besides becoming tedious to read, the end-the-sentence policy does not help with lists or parenthetical statements – two things that can cause tons of confusion.

As an engineer, I am a HUGE fan of the bullet point and numbered list. However, there are times when those are just not appropriate and that is when we need the Oxford comma (or serial comma – the one many people think unnecessary) and the serial semicolon.

In elementary school, I learned that the Oxford comma – the one after “and” or “or” in a list of three or more items – was required. I think I was well into my teens before I learned that some think of it as optional.

I always have a hard time coming up with an example of why that comma is necessary on demand, so I’ll give an example that made the news in March 2017.

The Oakhurst Dairy in Maine is cursing the lack of the legislature’s use of the Oxford comma. In Maine, activities exempt from overtime pay, as written, include:

(2) Meat and fish products; and

Because there is not a comma before that “or distribution” the courts ruled that the dairy’s delivery drivers were entitled to overtime. The ruling judge said that “shipment or distribution” both belonged to the action of packing – the actual distribution is a different act and does not fall under the exclusion.

Save money, use Oxford commas. 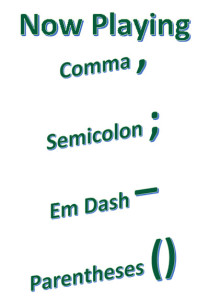 And what about a list of complex items? Or a list of lists? And that’s when the serial semicolon comes into play.

As it happens, that Main law I quoted above is a great example because it has a list and a complex list – where one list item contains “and,” “or,” or maybe even a comma. The complex list uses serial semicolons to further distinguish the specific list items.

(I find it amusing that the list of items involved in the overtime exception has numbers, serial semicolons, AND individual lines for clarity but the list of actions is ambiguous. What this ambiguity says about lawmakers is probably best for a blog not written.)

You could define “meandering” as parenthetical when it comes to thoughts and writing.

Commas have so many uses that they are easily overused. For example, what if you have a list within your parenthetical thought? Thus, except for very simple ideas, avoid commas for parenthetical statements (kind of like the one in this sentence).

Personally, I’m a fan of the em dash to offset my use of parentheses. If you have any confusion about dashes, check out the Comma Queen’s YouTube video on the subject, Mad Dash. On a side note, every one of the Comma Queen’s videos I’ve seen have been well worth the 2 or so minutes they take to watch.

Instead of manufacturing an example of using dashes for that meandering or tangential thought, I figured I’d use one I’ve already published. From my blog The Writer Can’t Write, She Implements:

Tell me where you want to be, and I’ll get us there. Sometimes by brute force (like how I learn software) and sometimes by a circuitous route; but I will get us there. And, if I can’t do it alone – always a possibility – I have a great group of friends I can ask for help.

The statements “like how I learn software,” and “always a possibility,” are both parenthetical. But rather than emphasizing the meandering of my thoughts with two sets of parentheses in two sentences, I added the variety of em dashes!

Remember, clarity is the most important part of communication. The easiest way to ensure clarity is to use short sentences: one subject, one verb, one thought. However, using only those types of sentences is a spectacular way to lose your readers. Without going to extremes, start to add some “advanced” punctuation to your writing.

Dare to write the occasional long, meandering sentence – just be sure to punctuate it properly!