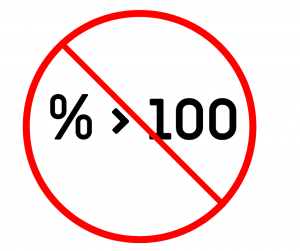 My sister, the HR person, argues that you can have more than 100% depending on what you’re talking about. For example, the difference between A and B can be 200% that between B and C. I think it’s the comparison of two differences so there isn’t really an original value that you are comparing to.

Personally, I think that the difference between A and B is twice that between B and C.

We agreed that we would never agree.