One of the places I feel WAY too many people have lost balance is politics. I know that the attention is going to a minority group of people who like to be all obnoxious – not to the majority who may or may not sympathize with the extremists but are not so extreme. The problem is that the noisy extremists suck the air out of everything else. And currently, many of them are becoming real threats to others. Why has debate become battle?

It seems to me that the noisy minority believes whole-heartedly in their freedom of speech, but not of those of people with differing opinions. They believe in their right to not mask or vaccinate, but not in my right to not get sick. They believe in the history of their parents and experience and do not allow for the teachings and experience of others. And we’ll just skip the “my body, my choice” hypocrisy. What these people do not seem to understand is that a person’s freedom to swing their fist ends before the it hits my nose.

More and more, I’m reminded of the final speech in the movie The American President. The whole thing is good, I suggest it to everyone as it hits several relevant points. However, for this post, I’ll stick to this:

“America isn’t easy. America is advanced citizenship. You gotta want it bad, ’cause it’s gonna put up a fight. It’s gonna say ‘You want free speech? Let’s see you acknowledge a man whose words make your blood boil, who’s standing center stage and advocating at the top of his lungs that which you would spend a lifetime opposing at the top of yours. You want to claim this land as the land of the free? Then the symbol of your country can’t just be a flag; the symbol also has to be one of its citizens exercising his right to burn that flag in protest.’”

(I dug the quote out of the IMDb website.)

If you haven’t guessed, I lean heavily towards the liberal end of the scale. More importantly, I lean heavily to the rational end of the scale. I can appreciate someone else’s opinions when the person can explain to me how they arrived at those opinions. I may not agree, but I can appreciate. (By the way, “because it’s true” is not an explanation.) 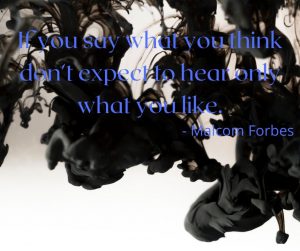 Balance in politics does not mean that everyone agrees. It’s that everyone allows for the disagreements, attempts to appreciate the other points of view, and quits swinging their fists before hitting someone else in the nose.

Here’s another thing, the extreme minorities at both ends of any scale are critical for American politics. They challenge how the majority of us in the middle think and feel about issues. When given equal airtime they provide balance. The problem is that “equal airtime” thing. We watch the news that tells us what we want to hear – not necessarily a balance of all viewpoints. What’s worse is that the news caters to that mindset. Shows that invite people who have a different opinion than the host and have a RATIONAL discussion on the topic is getting harder and harder to find.

Additionally, one extreme group (currently) seems to be louder and more obnoxious than the rest – sucking the air out of every other point of view, extreme or not.

I’ve been thinking about balance a lot lately. It keeps sneaking up on me in different ways: diet, sleep, life/work, falling, or not falling. So, let’s start at the beginning. According to dictionary.com, there are 29 definitions for balance; I’ll just stick with the first one: a state of equilibrium or equipoise; equal distribution of… END_OF_DOCUMENT_TOKEN_TO_BE_REPLACED